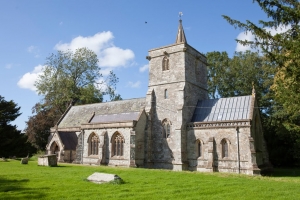 St Mary’s is one of only two public buildings in the village, the other being the 1950s-built village hall. In 1972 the church was joined with the churches of Brixton Deverill and Longbridge Deverill and later Horningsham to form the ecclesiastical parish of The Deverills and Horningsham, itself now part of the benefice of Cley Hill Villages.

The existence of a Saxon church on the present site was confirmed by the discovery of a font from that period during the extensive renovations in the 1840s. It is now in situ at the west end of the church. In 1099 the Chapel of St Andrew was registered on this site. During the Victorian renovations a stone ‘effigy of a noble’ was found thought by Pevsner to date from the C13th. The first rector of Kingston Deverill was registered in 1302. It is likely that the medieval church that we see now (with Victorian additions and alterations) was built around that time or slightly later, dedicated to St Mary the Virgin. The tower is C14th and there were minor additions during the next five centuries.

Between the years of 1842–47 the church was extensively renovated and refurbished, funded in the main by the Marchioness of Bath. These changes were chiefly to the nave, the south aisle and entrance porch. Extra pews were installed and a vestry extension constructed on the north side. The church is listed Grade II*.

Within the church the features worthy of particular interest are: the Saxon font, a C13th stone ‘effigy’, a late C15th stained glass window light, a wooden statue of the Madonna and Child from the C14th, the C17th pulpit and Victorian ceiling wooden rafters, beams, braces and mouldings.

In the churchyard there is a Grade II listed late 18thC chest tomb and a 1930s war memorial, again listed Grade II.

The church is undergoing an extensive programme of reordering, including installing a WC and a servery, removing some of the pews, upgrading the heating, lighting and audio systems and renovating the font. See here for further information.

The church was made redundant in 1971 and is now a private residence. 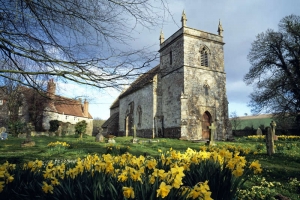 There was a church at Brixton Deverill as early as the Saxon period, for records show that Alfred the Great paused here to pray for victory before he fought the Danes at Edington in 878AD. That Saxon church would have been a simple building of wattle and timber.
The church consists of a west tower nave, and chancel, but only the lowest parts of the tower and an internal arch remain from the original 13th century building. The top of the tower was added in the 15th century, and the rest of the church was rebuilt in the 1760s. Then in 1862 the chancel was lengthened. A feature of note is the simple Norman font. This was brought to Brixton Deverill from the church at Imber on Salisbury Plain when that village was taken over by the military.
There is a very touching set of stained glass in the nave. Facing each other across the east end of the nave are windows commemorating two sons of Rev Emanuel Strickland. Edward Strickland, Emanuel’s third son, drowned in a storm at sea in 1861, aged just 16. His younger brother James died in Calcutta in 1866, aged just 17. Rev Strickland’s own memorial window is on the north wall of the nave, beside his sons’. Though the glass is not exceptional, seeing the sad story of one family’s history is quite touching.

Other memorials include a neoclassical mural tablet to Rev John Rogers (d. 1773), and a simple wall monument to the Frowd family, spanning three generations, beginning in 1776 and ending in 1813.

Parish Council meeting will be held on Wednesday 12th January, 2022 at 7:00pm 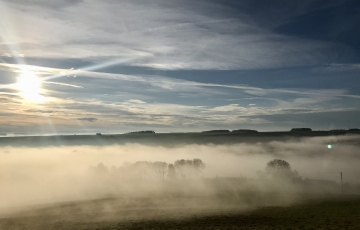